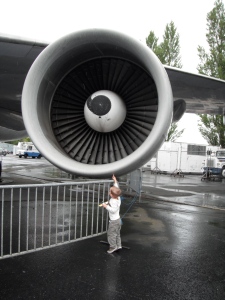 One of the things I love about the Museum of Flight is Jadon. He stares in awe at the massive planes before him at one moment, and then plays with his toy plane underneath the wing of the first 747 the next. He talks about the planes, makes noises, calls them different names. But, when he sees the 747 he says one word: Plane!

Certain big things are the engines of our lives. The most significant is character. Before Jadon was known to exist, a key question I’ve been asking myself is what are the big things I want my kids to have. The list became more refined when I heard the words: It’s a boy!

Big project #1:
I’ve been working on a novel for Jadon about the major virtues I want him to hold. Virtues are timeless. While the situations in life Jadon will face differ from mine, the virtues will hold just as true. The novel will center on this concept.

Big project #2:
Each birthday I write a letter to my boys in a journal. From time to time I write other things as well. These are thoughts, ideas, or quips I have for them. I am not sure when I will hand them the journals. I’m debating junior high or graduation from high school. There is wisdom I want to impart to them.

Big project #3:
I narrowed the focus of what I want for my boys: 1) To be strong men of God, 2) To be men of character and 3) To be who God designed them. A narrow focus helps and is essential.

The bottom line:
How each man passes down wisdom to his children is different. One thing remains true: good dads often narrow the focus to just a few things. This is important. There are many skills, virtues, abilities, etc in life. But, only a few are big, long-lasting, and essential. Virtue of character is a thing in life I want Jadon to awe and play under. That when he sees it he will say: Plane! It is an engine that will power his life.