Our view of death determines our view of life. Biblical teachings on end times, known as eschatology, is essentially a Christian view of death. The recent trends to avoid or downplay this teaching is unhealthy. Over emphasizing the doctrine is also unhealthy. In the push away from end times I’m often asked why I am a Dispensationalist. My reply is I’m a little ‘d’ not a big ‘D’ because I don’t emphasize the doctrine or focus on the current possible details. The short answer: in studying scripture, it’s what I see it teaching. I submit we should not shy away from end times.

It’s taught in scripture
Avoiding the end times parts of the Bible is to miss significant teachings of Scripture. In Matthew 16, Jesus chides the religious leaders for being able to determine the weather but were clueless on “the signs of the times.” Paul taught on the rapture, whatever view you take on it, to a baby church plant. He then wrote twice to that baby church to clarify end times teaching. The book of a Revelation is all about end times. The Bible does give us a framework and does teach on the end times. It does not give us a specific time table and tells us to not worry about timing (Acts 1:7).

It’s a matter of encouragement and perspective
The rapture and Revelation give us both encouragement and perspective. These essentials are lost if we avoid the end times. The rapture is meant to encourage us when a saint dies. (A strong argument for pre-tribulational rapture.) We don’t mourn as others do because death is a temporary state. The end times give us the needed perspective so we can practice blessing people instead of returning evil for evil. A HUGE part of end times is God balancing the scales of justice of a world filled with injustice. How can I bless those who persecute me when a I’m faced with injustice? The end times gives us the perspective of why.

It’s a matter of God’s character
I’m a Dispensationalist because I think Israel means Israel in the Bible. As Hosea illustrates, God will go after and redeem national Israel as Hosea redeemed his wife from prostitution. I’d submit that spiritualizing Israel in the New Testament makes the Bible ludicrous. Why? What assurance of salvation do we have if God wrote off Israel? This is the issue Romans 9-11 addresses. Further, Paul makes a clear distinction between national Israel and Gentiles in Romans 11. God’s treatment of Israel gives confidence in His treatment of us and the church. God is the God of second chances, of grace, and He keeps His Word.

It’s a matter of our character
Paul’s states in Romans 11 that we should be careful as God did not spare the natural branches, neither will he spare us. Much rejection of Dispensationalsim is arrogance of the grafted in branches. End times keeps us humble before God. For sure humans tend toward arrogance. Churches often become arrogant as well. In Acts 1:7 Jesus didn’t say there is no kingdoms of Israel, he said the timeline was none of our business. In Revelation Israel is specifically mentioned as well as mentions of various nations. End times is a check on our character.

It’s a matter of faith
Hebrews 11 has an end times perspective. It is true that the big issue in theology is a matter of interpretation, but not all views are valid. I believe in the plain interpretation of the Bible, meaning what the author intends to communicate is the meaning. All other viewpoints have no true bearing in how to interpret Scripture. There is a pattern of literal fulfillment of prophecy throughout Scripture. Spiritualizing prophecy yet unfulfilled is to play hermeneutical voodoo. While God is mysterious and did not give us all the answers, He is predictable in that he keeps His word with an uncanny literalness.

The bottom line:
Avoiding the end times is to lose much needed perspective and clarity for godly living. While I do not major on a time line of future events, there is a framework given to us for the purpose of encouragement and perspective. Key to all this is that God is not done with national Israel, just like he’s not done with you or me. His grace, mercy and justice are evident in end times teachings of Scripture. Be carefully balanced, but do not avoid this essential doctrine of Scripture.

Greatness is forged in adversity and the only substance it cares about is character. Adversity purifies character. It makes it shine. This is the development of Christ likeness. We too often find ourselves in the “prosperity gospel.” It is a false notion that if things are going well, then God must be pleased. Life isn’t saved and easy, it’s saved and hard.

We too often forget there are brothers and sisters in Christ who daily wonder if today is the day they may earn the martyr’s crown. Are they any less godly from the persecution they endure? No. Nor are they any better. God developed a plan for us all. Like art, some of our lives are tragedy, others drama, action, mystery, and some comedy.

We too often forget that here is not our home.

All these died in faith, without receiving the promises, but having seen them and having welcomed them from a distance, and having confessed that they were strangers and exiles on the earth. For those who say such things make it clear that they are seeking a country of their own. And indeed if they had been thinking of that country from which they went out, they would have had opportunity to return. But as it is, they desire a better country, that is, a heavenly one. Therefore God is not ashamed to be called their God ; for He has prepared a city for them. ~Hebrews 11:13-16

When we meditate on stories of triumph or sacrifice we see heroes. They are not perfect people. They often have great flaws. God is in the process of shaping us. Just as He shaped them. In each of these stories we see the glimmer of the image of God. As God brings out that spark He as well as we look to the day when all things are made new.

I would suppose it is much easier to write this than to live it. I’m sure it’s much more engaging to read about it then to be in it. Perhaps we too often shy away from it. The pleasantness of here can cloud the future far greater than any discomfort can. This may not make sense, but life in a fallen world doesn’t. We look to the day when all things are new.

There are no silver bullets, no perfect formula’s, no quintessential programs. There is work, study and prayer. Such should result in a growing love for God and a passionate desire to love people. Often living godly in daily life and building opportunities to share the Gospel may seem unsexy, but there is no getting around work. We all want bling, but I find it ironic that it was in a gentle breeze that God’s presence was made known to Elijah.

There is a funny thing I’ve found about heroes. While we fawn over their stories- they are often reluctant to share them and are glad that it is over, wishing none to go through it. Still, character is evident in adversity and shows a pure product. One day the glimmer will shine brightest when we are in the City God made for us. That City will be home.

If you thirst for heaven, then its time to man up. When adversity hits you will see how far He has brought you and how far you have yet to go. Home is soon, but not yet. 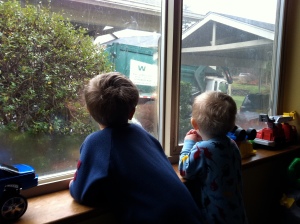 Monday is a huge day in my household. It’s garbage truck day… Seriously.

I smile at people’s reaction to what has become bigger than football at our house. (Of note pretty much anything that makes your kids smile makes you smile- other than fine china being dropped and shattering in slow motion.) The oft-repeated phrase “you need a life.” is stated. Ok, here’s the lesson…

Kids appreciate the little things in life. What we take for granted, they see as wonders of science. The garbage truck has what every boy loves: horsepower, noise, banging sounds and it’s big. (The garbage truck is also a significant support actor in the movie Toy Story 3,)

Imagine a world without garbage trucks, plumbing, electricity or Toy Story 3, and you’ll gain an appreciation for what we consider a little thing in life.

1 A good name is better than a good ointment,
And the day of one’s death is better than the day of one’s birth.
2 It is better to go to a house of mourning
Than to go to a house of feasting,
Because that is the end of every man,
And the living takes it to heart.
3 Sorrow is better than laughter,
For when a face is sad a heart may be happy.
4 The mind of the wise is in the house of mourning,
While the mind of fools is in the house of pleasure.
5 It is better to listen to the rebuke of a wise man
Than for one to listen to the song of fools.
6 For as the crackling of thorn bushes under a pot,
So is the laughter of the fool ;
And this too is futility.
7 For oppression makes a wise man mad,
And a bribe corrupts the heart.
8 The end of a matter is better than its beginning ;
Patience of spirit is better than haughtiness of spirit.
9 Do not be eager in your heart to be angry,
For anger resides in the bosom of fools.
10 Do not say, “Why is it that the former days were better than these ?”
For it is not from wisdom that you ask about this.
11 Wisdom along with an inheritance is good
And an advantage to those who see the sun.
12 For wisdom is protection just as money is protection,
But the advantage of knowledge is that wisdom preserves the lives of its possessors.
13 Consider the work of God,
For who is able to straighten what He has bent ?
14 In the day of prosperity be happy,
But in the day of adversity consider –
God has made the one as well as the other
So that man will not discover anything that will be after him.
~Ecclesiastes 7:1-14~